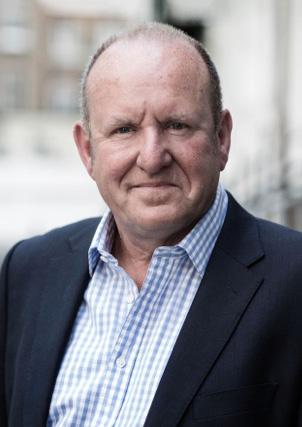 MO5.COM is pleased to announce that former president of Eidos, Ian Livingstone recently joined the association as Honorary Member.

Born on December 29th, 1949 in Prestbury, Cheshire, England, Ian Livingstone co-founded Games Workshop in early 1975 with flatmates Steve Jackson and John Peake. The company started publishing Owl & Weasel, a newsletter about board games, role-playing games and wargames before distributing Dungeons & Dragons and other TSR games later the same year. Games Workshop began publishing fantasy games magazine White Dwarf in 1977 with Livingstone as its editor, and opened its first retail store in West London in 1978. In early 1979, Livingstone and Jackson founded Citadel Miniatures with Bryan Ansell to produce miniatures for role-playing games and specialist ranges for Warhammer (1983) and Warhammer 40,000 (1987). In 1982, Livingstone co-wrote The Warlock of Firetop Mountain with Steve Jackson with Livingstone writing fifteen more Fighting Fantasy gamebooks, including City of Thieves (1983) and Deathtrap Dungeon (1984), in the series that sold over 20 million copies. He also created several board games including Judge Dredd (1982), and video games such as Eureka! (1984), the first title published by Domark. After he and Jackson sold Games Workshop in 1991, Ian Livingstone invested in Domark in 1993 which merged with three companies to create Eidos PLC in 1995 where he served as Executive Chairman until 2002, and later as Creative Director. At Eidos he launched global video games franchises including Lara Croft: Tomb Raider and Hitman, and also helped design Beach Life (2002) and Pony Friends (2007). In 2009, Square Enix bought Eidos and Livingstone was appointed Life President of Eidos before leaving the company in 2013. From 2013 to 2017, he served as Chairman of Playdemic, developers of global hit mobile game Golf Clash. He co-authored the Livingstone-Hope Next Gen review published by NESTA in 2011, recommending changes in ICT education policy to include computer science in the national curriculum. He was ranked the 16th most influential person in the UK’s digital economy in the Wired 100 list in 2012. He is currently a Non-executive Director of Sumo Group PLC and also Midoki, Fusebox Games, Flavourworks, Antstream and Playmob. He is a patron of National Videogame Musem, a Trustee of the British Game Institute and Vice President of Special Effect, a charity which uses video games and technology to enhance the quality of life of people with disabilities. He is opening two Livingstone Academies in association with Aspirations Academies Trust focussed on digital creativity and the Arts. Livingstone won a BAFTA Special Award in 2002 and was appointed Officer of the Order of the British Empire (OBE) in the 2006 New Year Honours list, and Commander of the Order of the British Empire (CBE) in the 2013 New Year Honours list for services to the UK computer gaming industry.